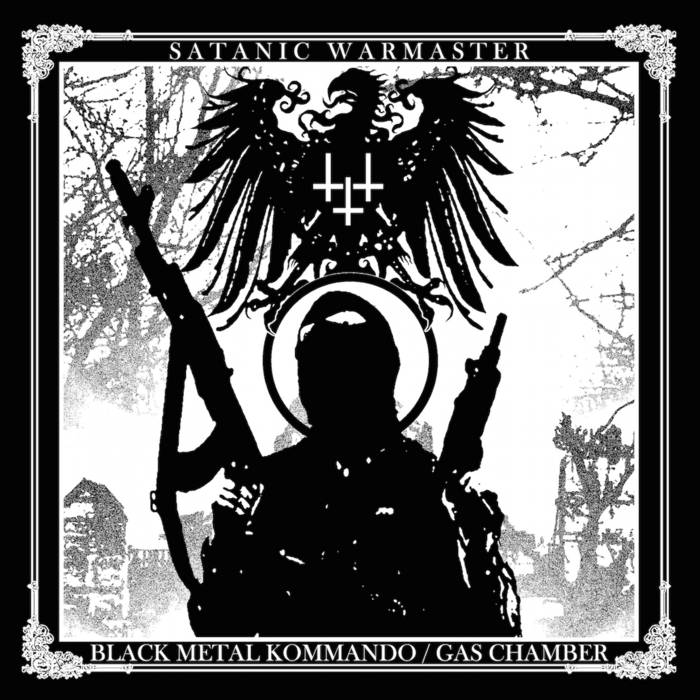 Compilation of unreleased material from 2000-2001.

Werwolf - All instruments and vocals.


WEREWOLF RECORDS, freshly in conspiracy with HELLS HEADBANGERS, is proud to present a timely CD reissue of SATANIC WARMASTER'S monumental Black Metal Kommando / Gas Chamber collection. SATANIC WARMASTER should need no introduction. Since 1998, main man Werwolf has doggedly pursued his vision of complete and total BLACK METAL - encompassing ancient traditions reverently gleaned from Norse, Polish, and French idioms - and poignantly willed them into a potion that's uniquely his own, in the process influencing thousands with five full-lengths and countless EPs and splits, and largely defining what Finnish black metal means to the worldwide consciousness.

Originally released in 2005, Black Metal Kommando / Gas Chamber is a special insight into the SATANIC WARMASTER aesthetic. The six Black Metal Kommando tracks encompass recordings made for what was initially to be the band's first full-length. Although the pivotal Strength & Honour eventually emerged in its place, the BMK songs show a nebulous traditionalism that SATANIC WARMASTER would soon perfect. The three tracks that make up the Gas Chamber recording are an otherwise-unreleased demo that display a harsher, more punk rocked side of the band, recalling Werwolf's earlier bands Pest and especially Blutrache. The last three tracks, generally known as "Project Tireheb," are a one-off experiment whereby Werwolf and Finnish noise artist Moozzhead cover two electronic-era Beherit songs in a more organic manner and offering one song in that style, with a quintessentially Beherit-esque title. Altogether, the dozen songs across this compilation prove that SATANIC WARMASTER's spirit burns restlessly and true, the black flame of hate flickering in many shapes but always ones that honor the original spark.

Featuring Oakland sounds from the Smart Bomb collective and Samplelov.